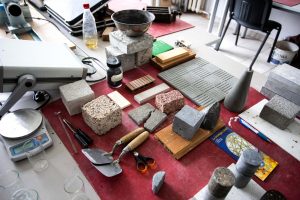 Group of scientists at Kaunas University of Technology (KTU) Lithuania have discovered a method of producing increased strength gypsum binding material using only industrial waste products. By combining phosphogypsum – fertilizing production waste, zeolite – a waste product from oil refining industry, and an activator, they have cast gypsum stone, which is twice stronger than usual.

About 5 tons of phosphogypsum is generated per ton of phosphoric acid production, and worldwide phosphogypsum generation is estimated to be around 100–280 MT per year. Globally, 15% of its production is recycled as building materials, agricultural fertilizers or soil stabilization amendments and as setting controller in the manufacture of Portland cement. The rest is stored near factories, which not only occupies large land areas but also causes serious environmental contamination. (In Lithuania, phosphate industry company Lifosa produces almost 500 thousand tons of phosphoric acid and 4-5 times of the phosphogypsum, which is transported to the waste piles.)

“We have had enquiries from industry, who were interested in managing their waste products, and this was the primarily impulse for our research. All the materials used in our invention are waste products from different industries. After combining zeolite, which is coming from an oil refining company, and phosphogypsum from fertilizer producer we added a certain activator, which changed the micro structure and significantly increased the strength of the final product – plaster stone”, says Aras Kantautas, researcher at KTU Faculty of Chemical Technology, one of the authors of the invention.

According to Danutė Vaičiukynienė, researcher at KTU Faculty of Civil Engineering and

Architecture, a co-author of the invention, the body of research on producing plaster from phoshopgypsum and zeolite is substantial. However, the uniqueness of KTU’s invention lies in combining of three waste materials: “By adding supplements we increased the compressive strength of phosphogypsum from 11MPa to 22MPa. Our material has much better mechanical and constructive properties, which is very important having in mind that plaster is usually used in building industry and strength is its most important quality”.

Zeolite, a very strong sorbent, is used by KTU scientists for cleaning phosphogypsum, which is contaminated with phosphoric acid when acquired as waste product. During their experiments, the researchers determined the optimal proportion of all the additives to the mixture to achieve best qualities of the final product: the optimal proportion of zeolite for sorption of acids is 5%; 5% of activator in the mixture resulted in its pH=6.95, and 10% – in pH=6.07 respectively. By using optimal proportion of zeolite sorbent the compressive strength of dry samples increased, and pH of the final product became close to neutral.

“The analogical research focusing on production of plaster from phosphogypsum usually involves using high temperatures or expensive binding materials. Whereas for our invention we use only waste materials from different industries, which can not only be acquired for symbolic price, but also are becoming a useful material for building and other industries, wherever plaster is used. Our gypsum stone is stronger than standard and its production is not only simpler and more efficient, but is also adding to the zero-waste industry concept”, says Dalia Nizevičienė, researcher, and co-owner of the invention.

The KTU research group has already applied for a patent of their invention to the State Patent Bureau of Lithuania. Once obtaining the patent, the scientists will look into cooperation with business organizations in order to commercialize their invention. Technology transfer is facilitated by KTU National Innovation and Entrepreneurship Centre – one stop shop for knowledge intensive business to contact research.

2018-04-30
We are using cookies to provide statistics that help us give you the best experience of our site. You can find out more or switch them off if you prefer. However, by continuing to use the site without changing settings, you are agreeing to our use of cookies.
I agree